The Deputy Governor of Imo State, Prince Eze Madumere, this evening shone like a special star as he stole the show during the maiden All Progressives Congress State Executive Council, which held in New Concorde Hotel, Owerri, Imo State.

The Deputy Governor who was said to have declared the meeting open commended the Chairman of the party, Chief Hilary Emeh and his executive members for pulling through the first ever State Executive Council Meeting since the formation of the party in the State, saying that it signals better things to come.

HAVE YOU READ?:  Chilaka tips Ihedioha to Imo's dead economy

He also used the opportunity to congratulate the Party Executive members for the elongation of their tenure occasioned by the decision of the National Executive Council. He said it was a well thought-out. He therefore commended National Chairman of the party, Chief John Oyegun, National Organising Secretary, Osita Izunaso and others for a job well done.

He urged all the stakeholders of the party to join hands to ensure there peace by working in unity irrespective of what might be their aspirations, saying that the party remains supreme. He decried the lukewarm attitude in the party as there has not been effort in membership drive as everyone is deeply engaged in personalised project.

Meanwhile, the party also used the opportunity to raise funds for the party, which created room for all and sundry to make pledges so as to keep the activities of the party running especially this season of electioneering process.

Advertisements
HAVE YOU READ?:  Evans’ lawyer withdraws from kidnap case

High point of the event was the colourful well dressed Imo women who besieged the venue of the Stakeholders meeting to usher out Prince Madumere with victory songs. It was like a presidential campaign as the women took a long walk to Madumere’s official residence insisting on experienced and seasoned administrator to take over from Okorocha.

Addressing the number two citizen of the State on the reason they thronged to the venue, Dr. (Mrs.) Nkechi Okoro said they are of Rescue Missionaries who would not want the good legacies of the Rescue Mission to be confined to the dustbin of history.

she described the Deputy Governor as a very calm leader, experienced, respectful, cultured and a seasoned administrator with a vision to take the State to its right position in the nation.

“We want a Governor who has the capacity and competence to harness both material and human resources that are abound in the State and we cannot afford to toil with the future of the State in whatever guise. That is when we heard about the Stakeholders meeting, we organise ourselves to show our Deputy Governor that he is not alone in this race. We have seen others we strong but the women in our frailties, we are ready to mobilise ndi to vote into power a man who can listen to us and carry us along in his policies and programmes.

HAVE YOU READ?:  Uche Nwosu accepts Supreme Court judgment of disqualifying him 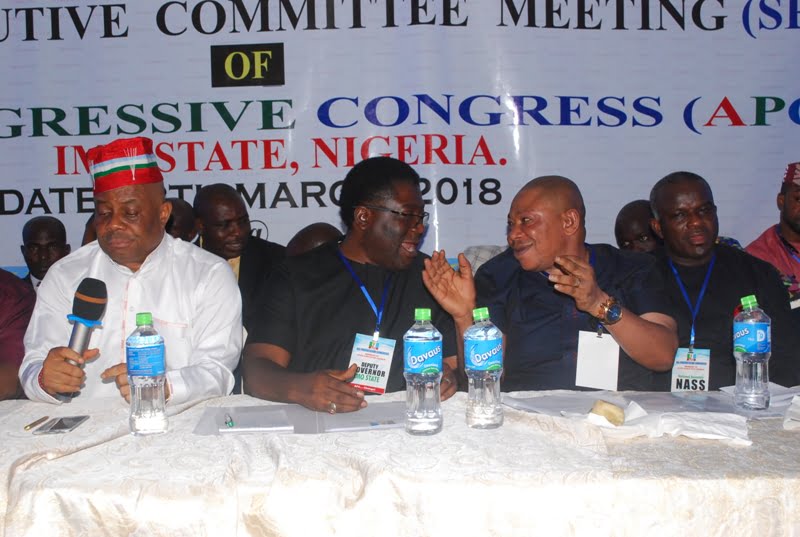 Imo Women in Deputy Governors train with various inscriptions of like: A man of vision, experience counts, a great leader of note among others shortly after APC SEC meeting in Concorde Hotel, Owerri.

Okorocha decries invasion of his warehouse by Imo...