As Imolites keep suffering because of shortage of taxis caused by the ban on unbranded cabs in the city of Owerri especially.

With government taskforce all over the city impounding vehicles that have not been painted with the TaxImo colour, drivers have complained of the high cost the government slammed on painting vehicles at the official spots.

The driver who spoke to www.otowngist.com on anonymity, said; “I went there with Sixty Thousand Naira and went home with just One Thousand Naira”. 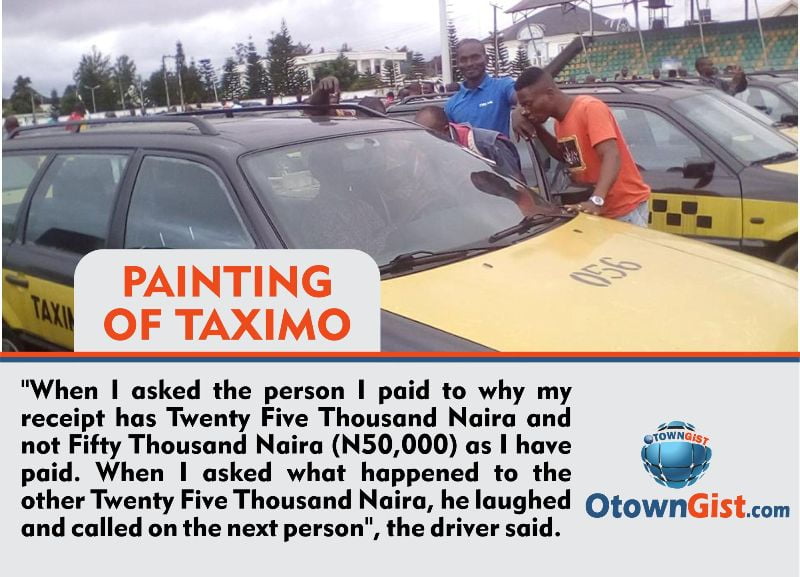 The drivers comments gives weight to the rumoured N60,000 fee drivers have to pay before having their vehicles painted by TaxImo officials.

The driver who said the cost was outrageous, added that he was surprised to get a receipt of Twenty Five Thousand Naira (N25,000), when he paid for ‘Union Registration and Fleeting of Franchise Vehicle’ with Fifty Thousand Naira.

Officially, the driver said he paid another Five Thousand Naira, which no receipt was issued for and went on to say; “There were other people that took money from me, I don’t know if I will call them touts or agents. They were hustling and are ready to speed up the process for you, if you give them money”

The drivers have been worried that they go in with about Sixty Thousand Naira, but leave with just Twenty Five Thousand Naira receipt and this does not really go well for a system that is assumed to be accountable and trasperent.

A source close to the TaxImo officials refused to comment on the issue, while another said they are still working on balancing everything.

Tension in Imo Assembly over plot to impeach...

APC plotting to use Ganduje, Uzodinma, Bello to...

Family of five die in gas inferno in...