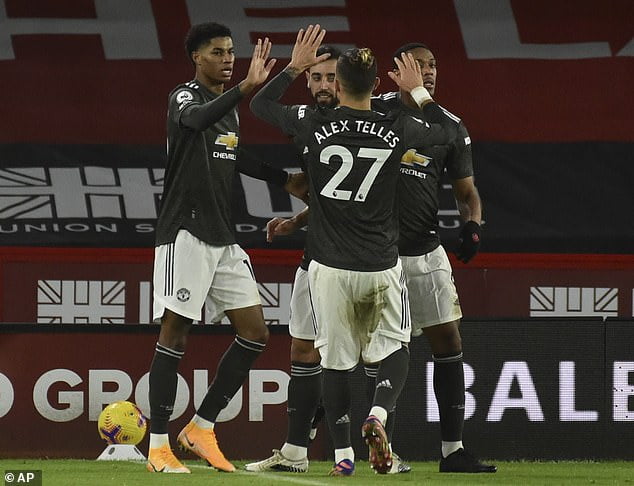 Paul Scholes and Michael Owen believe Manchester United are capable of winning the Premier League this season after picking up a sixth straight away win at Sheffield United.

United came from behind to beat Sheffield 3-2 on Thursday night to move five points behind league leaders Liverpool with a game in hand over the Premier League champions.

Marcus Rashford scored twice either side of an Anthony Martial strike and Scholes believes United’s attacking line-up can serve them well to launch a title charge.

HAVE YOU READ?:  Coronavirus corpses will be buried by government – Lai Mohammed

“I think if they can keep nine or ten players fit for the next 26 games they will be there or thereabouts. They’ve found an exciting way of playing,” Scholes told Amazon Prime Sport.

“I think (Solskjaer) has changed formations and personnel a lot. For five games (last year) they didn’t change the team and it was this team tonight without the left-back and goalkeeper. It’s a 4-2-3-1 and it worked.

“It’s a formation that really suits the team. (Bruno) Fernandes in the number 10 role feeding Martial, Rashford and (Mason) Greenwood. How fantastic is that? They’re one of the best, quickest finishers around in Europe when they get chances.

“The problem is getting possession and getting control with (Paul) Pogba and (Nemanja) Matic. These two need to get control of the game, Fernandes needs that. Once they’ve got that they’re flying.”

For Owen he believes playing the likes of Pogba, Fernandes and Rashford in the Red Devils squad on a regular basis is a must for Solskjaer, who has tampered with his starting line-up since the start of the season.

Owen told Prime Sport: “Well they can (win the league). There’s a few teams that can. The only way they can is by getting their best players on the pitch.

“If you’ve got Pogba and Fernandes in your squad you can’t win the title if they’re in the stands. You’ve got these unbelievable players you’ve spent millions on, the only way you will win the title is with your best players playing.

“If you take two or three out then they’re an ok team. Ole Gunnar Solskjaer has to keep finding a way of getting Pogba, Fernades and Rashford playing togehter, how they haven’t kept them together is unbelievable.”

HAVE YOU READ?:  Why I Changed from DJ Lil Saint to DJ MavKing

Two-goal hero Rashford, however, was quick to quash any idea of a title charge as he believes the season can change very quickly for every team.

The England forward told Amazon: “We take it one game at a time, it’s early on in the season. There’s a lot of football to be played.

“There will be a lot of ups and downs for everyone. We have to find the consistency away from home at home and we will see where we are late in the season.”

HAVE YOU READ?:  TB Joshua 'waiting to hear from God' before reopening church

Manchester United have now won six games in a row on the road but their focus now turns to Old Trafford where they have won just once in the league all season.

Solskjaer’s squad face Leeds United in a derby clash on Sunday night hoping to close the gap on the top of the table.

Fallout Of Reception: “Owerri Zone Should Have Presented A Shopping List To Uzodimma”