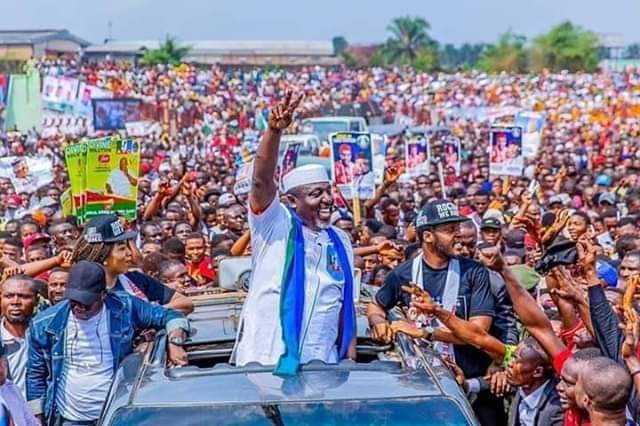 Built under Rochas Care, an arm of Rochas Foundation, the Senator representing Imo West Senatorial District, claimed that it was a pet project by his children to empower the less privileged and downtrodden of the society.

While a total number of 31 participants from Internally Displaced Persons (IDPs) camp graduated from tailoring, 15 Physically Challenged Persons from the Disabled colony trained on ICT, all at Karamajiji were empowered.

Speaking after commissioning the building, on what informed the basis for the project, Senator Okorocha explained: “This is Rochas Care programme, an arm of Rochas Foundation, a reach out and touch programme where we go to rural areas to uplift the lives of the downtrodden and the poor of the poor like Karamajiji.

“Today, we commissioned a skill acquisition centre built in their honour to train them in skills like computer, tailoring, salon, among others to empower them.

“We have realised that majority of our people live in the rural areas and somehow we are not area of the fact that we have many of them suffering there. Rochas Foundation is breaking the jinx by reaching out to these rural dwellers to touch the lives of the poor people.

“Coincidentally, the plan has been one for one month but within the period of planning, one of my son’s close ally and a son of my wife’s sister passed away. We decided to honour him by dedicating this skill acquisition programme building to him as Dozie Centre. However, the programme, primarily is about reaching out and touching lives and helping the poor and the less privileged in the society,” he said.

“We have also raised about 23,000 Nigerian children, empowering them with free education. It has nothing to do with politics but if politics is helping the poor it will be good if everybody plays it.

“As I said previously, it has nothing to do with 2023. Incidentally, these people may not even know what is happening and may not likely vote. What can a hungry person at the IDP do for anyone? We are here on humanitarian ground to help bring succour to the poor and the less privileged.

HAVE YOU READ?:  University of Agriculture & Environmental Sciences is not your brainchild, Okorocha tells Uzodimma

“It may be difficult to quantify in monetary terms what we have expended here. As I said before, we have over 23,000 children in our scholarship and we admit 2000 children to our different schools every year and that will give you an idea of what we spend.

“We have schools in Zaria, Jos, Kano, Adamawa, Calabar, Enugu, Owerri, Ibadan and many more states. In all the schools we have thousands of children going to school free. We provide accommodation, feeding and school uniforms. Teachers are paid and we have over 1000 teachers that we pay monthly in support of the Foundation.

HAVE YOU READ?:  Confessions from Okorocha’s eight years of necromancy

“I never quantified what goes into it because more importantly, it is a spiritual thing. It is a covenant between me and my God, when I told God to bless me so that I can bless others, honour me so that I can honour others, give me so that I can share with those that don’t have because on my own, I can do nothing but can do all things through God that give me the strength,” he said.

HAVE YOU READ?:  Okorocha to Buhari: Sack incompetent appointees