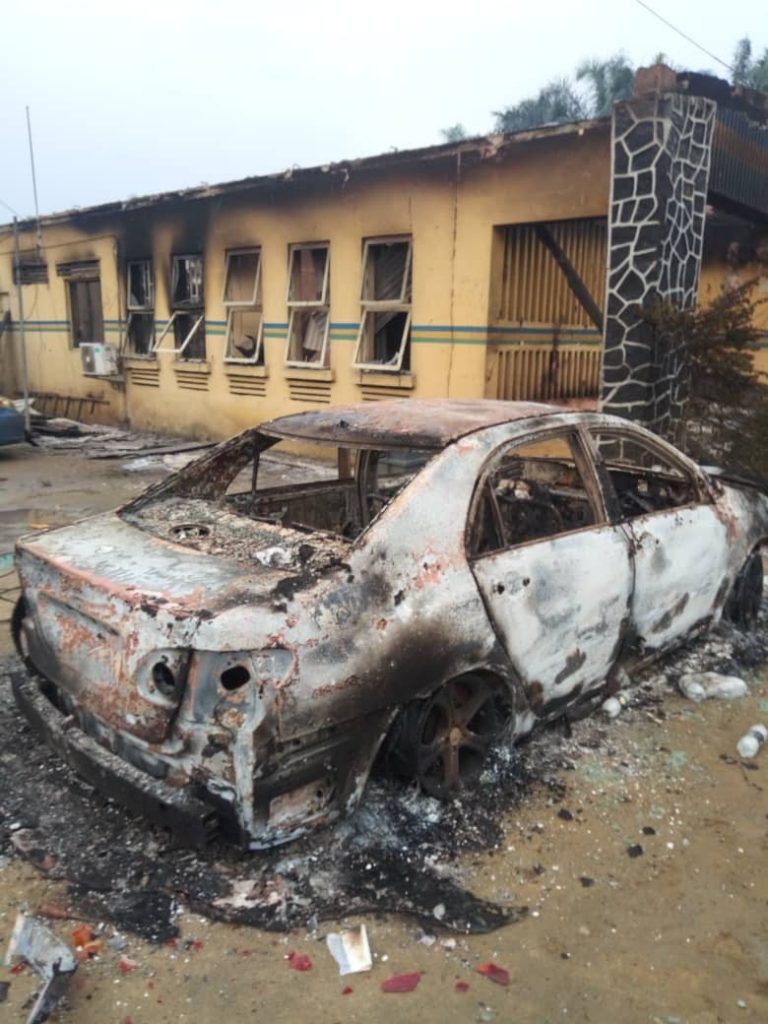 The peaceful protests that erupted simultaneously in different parts of the state and country few days ago, have assumed a dangerous and tragic dimension, as Nwaorieubi, in Mbaitoli local government area was turned into war zone, yesterday, when over one hundred youths riding on motor bikes, stormed the area and set the police station ablaze.Similarly, the Orji police Station in Owerri North was also set on fire by unknown thugs while unconfirmed sources disclosed that they were other police stations that were burnt and the inmates released unconditionally.

HAVE YOU READ?:  Imolites to guber candidates: Let Ihedioha be Appeal to them to shun litigation Want Governor-elect to run unity Govt

It was gathered from an eyewitness account that trouble started at Nwaorieubi when the youths who were on their way to Owerri from Orlu, were intercepted by the policemen, who wanted to know where they were going and if they were not aware of the curfew imposed by the state government. “The youths told the policemen that they are aware of the curfew but had urgent need to go to Owerri for important assignment. The policemen refused to let them go. At that point, the youths became angry and restive, hence a fight ensued. The environment became tensed as there was exchange of sporadic shooting between the youths and the police, which resulted in setting the police station ablaze.Lives were said to have been lost, while others sustained various degrees of injuries”.

HAVE YOU READ?:  #EndSARS: Buhari presides over NSC meeting

A middle aged man who claimed to be at the scene of the fracas expressed surprise that, “despite the sporadic exchange of gun fire, none of the youths who all tied red cloth on their heads sustained injury, as bullets bounced on their bodies and fell down without penetrating or injuring them.

Meanwhile, most politicians in the state, frightened by the spontaneous protests, are said to have gone into hiding to avoid unpleasant consequences, while some are said to be contemplating travelling outside the country”.

HAVE YOU READ?:  Ohakim Speaks On Life After Losing Imo Guber Election

A top politician in the state, who spoke to this reporter on condition of anonymity, said, they now disguise themselves to avoid being noticed or identified “by the protesting youths who see us as oppressors, not knowing that, we don’t have much, except our basic salary which the governor even hardly pays us”.

A lawmaker from Okigwe Zone(namewithheld) disclosed that even in the face of this crisis, we are yet to get paid for last month.Worse still is that the governor is contemplating on to cancelling the #2million we use to get monthly from council allocation to attend to the needs of our people.

‘Orji Kalu is not an Igbo leader’