CAMPHOPE & HOPISM: IMO PEOPLE NEED TO KNOW WHAT THEY CONNOTE 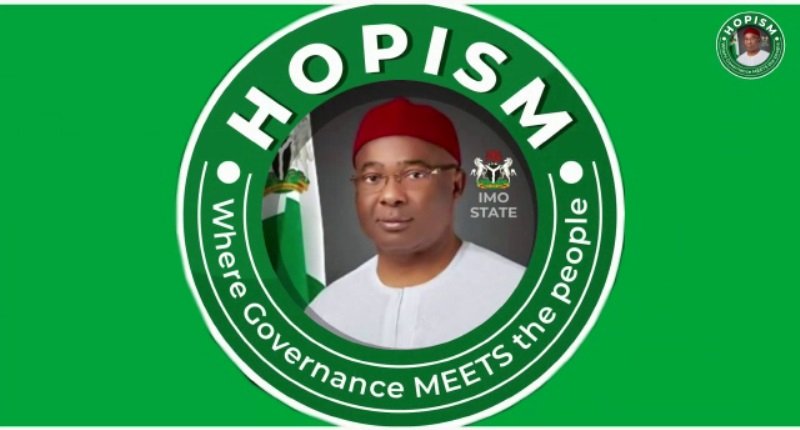 Achike Udenwa came in 1999, as Imo governor, with his REDEMPTION mantra. The military handed over to him. Col. Tanko Zubairu. Ask me, Udenwa stabilized democracy in the State, after the military had gone. Ask me again, Udenwa Redeemed Imo from the military leftovers. From the military mentality or influences.

Imo needed a Cool-headed man like Udenwa at that stage, to anchor. Or, berth. Or, to take over from the Khaki folks.
Under Udenwa, Imo could be said to have had the most sophisticated, most turbulent, most Prestigious and most dogged House of Assembly members. And they assisted Udenwa to strengthen democratic ethos in the State.

What is the debate here? Imo people didn’t need to ask question before knowing what Udenwa meant by Redemption. They understood what he meant by Redemption both in words and in actions. There was government, no doubt. No ambiguity.

Advertisements
HAVE YOU READ?:  HOPISM: Group rallies support for Uzodinma

Ikedi Ohakim came with his New Face of Imo slogan. He was also on Course. He came up with his Green and Green Initiative. That, had given the State a facelift, in terms of Sanitation. The result would have been outstanding, except the over zealousness of one man. Name withheld. You know, it is not everything that you know, you would talk about. Do you understand? At times you keep certain information in abeyance. Reservation. The person in question injected Coronavirus into the whole exercise. And things fell apart. We are telling ourselves the home truth. The gospel truth.
In other words, Imo knew where Ohakim was coming from and where he was going.

They understood what the Isiala Mbano born “guy”, meant by New-Face. Nothing to explain. He was determined to give Imo a New face. He had the big dreams. The dredging of Nworie River. The oak refinery, etc.

Then, Rochas Okorocha, the apostle of Rescue Mission. On arrival, he cleared 12 months arrears of Pensions and Salaries. Opened Owerri. Created roads in areas where nobody had thought was possible. Gave young men with no godfathers, the opportunity to take over leadership at certain levels. Expanded roads. Exercised Political Will. And so on. To show that he was really on a Rescue Mission. Imo people on their own knew what he meant by Rescue Mission. And he lived upto that credo.

HAVE YOU READ?:  Linus Okorie's Governorship Bid and Youths of Imo State By Clinton Ogu

Udenwa, Ohakim and Okorocha all had the problem of Succession.

Next, Chief Emeka Ihedioha and his Rebuild Imo Chorus. Even when that mantra appeared contentious, it could also be justified, because he was of the PDP, and taking over from an APC government. He needed to play the Politics of that moment, for his own sake and that of his Party. Afterall, Okorocha came with the Rescue Mission stuff.

Let me tell you this. And believe me because it is true. Ihedioha’s government was promising. He showed that, there was light at the end of the tunnel. He had the programme and the knowledge.

But he took off, with a wrong step, and that affected what would have been a very beautiful narrative. He had the team, but misplaced some of the players. And that didn’t help the administration.

I make this claim and with high sense of humility. If he had placed his players in their proper wings, the whole tension or “wars”, per se, would have been averted. He didn’t need that tension or the “wars”. That removed the shine off, a very promising government. What do I mean by his players and their wings or positions?

Uche Onyeaguocha is a very brilliant man. Very dogged. But he would have done better as an adviser or even as Chief of Staff, than, as Secretary to the State Government (SSG). Chris Okewulonu or some other modest man or woman, would have been appointed as the SSG. If that had happened, the tension generated by that office under Onyeaguocha, would have been skipped or nipped in the bud.

Jasper Ndubuaku would have also done well as an adviser with his rich Political experience. Alex Emezim would have led the Recovery team. Then somebody like Chuma Nnaji would have taken over ENTRACO. I am talking about men who could have produced results without shooting guns indiscriminately.

With the activities of some of these people, the atmosphere of tension or “war” enveloped the State and began to spread. All in all, Ihedioha showed or demonstrated that he knew what he had come to do. He showed that he understood the nitty-gritty of governance. May the God of Second chance, locate him.

Then, Senator Hope Uzodinma (Onwa) and the Caption of this literature. Camphope and Hopism: Imo People Need To Know What They Connote.

For those who do not know, the Chieftaincy title of the Imo governor, His Excellency, Senator Uzodinma is “Onwa Oyoko”. A very beautiful title in Igbo land. “Onwa” means moon. “Onwa na etili ora or oha”. And I would prefer to address him as “Onwa Imo” and not “Onwa Oyoko”. But whether he has begun to shine for Imo people, is the big question. One million dollar question. That is also not the heart of this essay. But to know, what he and his disciples mean by, Camphope and Hopism. I am confused. And I believe a lot of Imo people and by extension, most Nigerians are equally Confused. Nobody is in the know.

HAVE YOU READ?:  Would you marry someone you know too well?

The initial impression was that, Camphope was the Political structure or the Political family of the Imo Governor. But the governor himself had said that he had no Structure. That, he came through Ben Johnson way. In other words, Camphope does not exist. It’s a smoke-screen. An imagination.

And the way the appointees of the governor, believed to have been products of Camphope, fight among themselves, without reservation, only confirmed the governor’s honest claim, that he came without structure. If these appointees had belonged to one Political family, called Camphope, they would have behaved differently. They would not have been fighting among themselves, as if they didn’t come from a particular Political Camp.

They have also claimed that they have taken over APC in the State. Hence, the original owners of the Party mostly found in the Rescue Mission family and other outlets like the Coalition and Destiny, have decided to be watching the drama closely.

Yet, they have also Created Camp’s within their claimed Camphope. They do not trust themselves. This is the most fragile government in the history of the State. And I gave you an instance.

Those adjudged to be “Camphope APC” in Owerri Zone with nine Local Governments had met the previous weekend. At the meeting, they said they had decided to organize a Reception for the governor. And then drafted a very lengthy list of the Planning Committee Members.

HAVE YOU READ?:  Full text of President Muhammadu Buhari's address on Covid19

Now see the absurdity. The kind of strange politics these people are playing and by so doing, authenticating the governor’s claim that he came without structure. If the opposite of that claim had been the Case, Could they (Prince Akakem and Chief Amadi), have claimed to be apex leader and leader respectively, in Owerri Zone, where the sitting Deputy Governor, Prof. Placid Njoku comes from and a former Deputy-Governor, Dr. Mrs. Ada Okwuonu also comes from. All in APC. Or, where there are two former speakers, also in the party, Rt. Hon. Godfrey Dikeocha and Rt. Hon. Kelechi Nwagwu. And there is a sitting Deputy Chief of Staff also, Dr. Patrick Ekeji.

These are Power-hungry “buffaloes”. Power hunters. They shared positions for themselves, not minding the demands of protocol. The appointees are all fighting for Supremacy and leaving governance to suffer.

We have also heard about Hopism. Under normal scenario, Hopism should be or should mean the principle or philosophy of the administration. Since “ism” means a set of ideas or system or beliefs. It could also mean behavior.

HAVE YOU READ?:  ONLY INDEPENDENT INEC CAN GUARANTEE INCORRUPTIBLE ELECTIONS IN NIGERA.... SAM EKE

And it appears that those behind the acronym, “Hopism” do not know what they are talking about. It is another brand of sycophancy. As we write, Imo people do not know what Camphope is all about. And what Hopism entails.

The governor “handled” the APC Primary, for the Imo North Senatorial District bye-election and it stucked. He led the Edo election for APC with Governor Abdullahi Ganduje, it also stucked. The two exercises hit the rocks. Perhaps, that’s Hopism for them. And not for you and me. We need to be educated on all these. The APC in Imo Staggers under the governor.

What informed the governor settling for Frank Ibezim, in lieu of other aspirants, with Local Contents in the Imo North Senate bye-election is yet to be known? With all the Controversies, the governor should have told Okigwe Zone people why he chose Ibezim above others.

But he has remained mute in the face of the Contentions, to that effect. Do we call that Hopism? Which direction is this government going? Where is the government’s Compass facing?

Almost nine months already gone, the governor should give Imo people direction. Another way of asking, What is Camphope? What is Hopism? Whether these questions are answered or not, we shall Continue to Clap for Jesus.

Imo Attacks: The real worry should be that...

IMO: Between Uzodinma, Okorocha and IPOB

From millionaires to minnows: The grace to grass...

How Buhari received “a total idiot” in Aso...

RE: CRIMINAL AND FRAUDULENT ACTIVITIES OF BARRISTER REUBEN...

Is the Quest for a Mega Party Another...