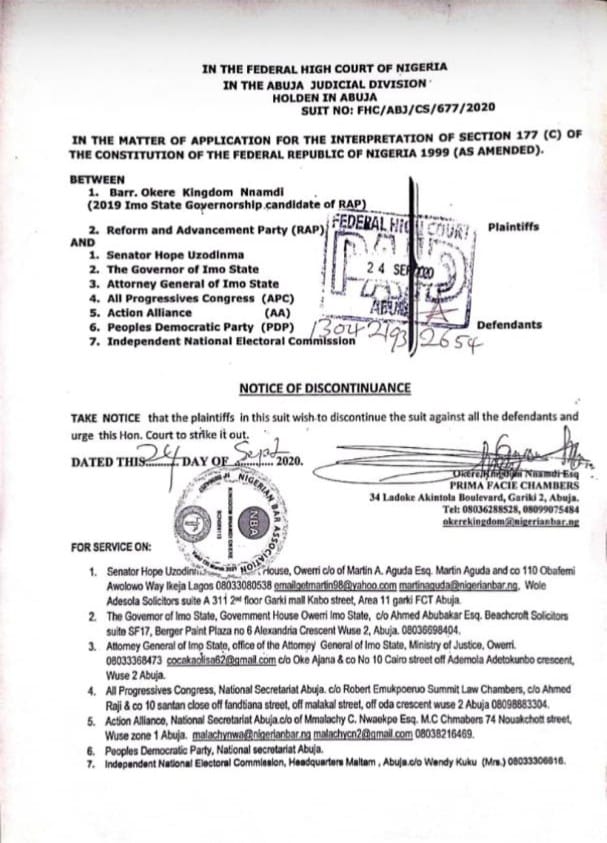 The Reform and Advancement Party (RAP) and its 2019 Governorship candidate, Barr. Okere Kingdom Nnamdi have filed Notice of Discontinuance in a case they instituted against Governor Hope Uzodimma and six others at the Federal High Court, Abuja.

The duo had approached a Federal High Court, Abuja in suit No: FHC/ABJ/CS/677/2020, seeking interpretation of section 177(c) of the constitution of the Federal Republic of Nigeria 1999 (As amended)

It was gathered that RAP and Okere filed a motion titled: “Notice of Discontinuance” stating thus: “Take notice that the plaintiffs in this suit wish to discontinue the suit against all the defendants and urge this Hon. Court to strike it out”.

HAVE YOU READ?:  I’m being persecuted because I refused to surrender Benue land to herdsmen – Ortom

When contacted on phone on Monday, Okere said that he filed the motion of discontinuance because of a similar case pending before the Supreme Court filed by Philip Umeadi.

Okere noted that in order not to allow his suit to be abuse of Court process, he decided to discontinue with the suit.

Umeadi who was a former INEC Commissioner, has gone to the Supreme Court asking the apex Court of its judgment on Ugwumba Uche Nwosu over who is the authentic governorship candidate of the All Progressives Congress (APC)in Imo State in the 2019 election.

HAVE YOU READ?:  Nigeria’s ambassador to Qatar,Abdullahi Wase dies

Umeadi in Appeal No SC/1384/2019, asked the Apex Court to ask INEC to withdraw the Certificate of Return given to Uzodimma and give it to Chief Emeka Ihedioha, who is the candidate of the People Democratic Party (PDP).

Meanwhile, the Federal High Court in Abuja is expected to sit today on the matter.

Daily Nigerian Horn further learnt that the suit filed at the Apex Court of the country by Umeadi is billed to hold next week.

Several supporters of Governor Hope Uzodimma viewed the development as the best thing that has happened in the state of recent while Peoples Democratic Party (PDP) supporters advised Uzodimma’s supporters not to rejoice yet.