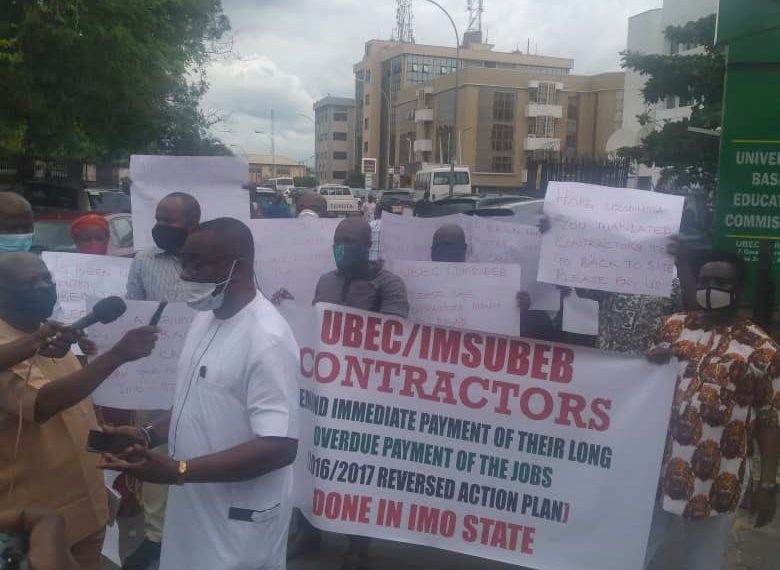 Aggrieved members of Imo State Registered Contractors yesterday protested over the non-payment of over N4.2 billion owed them by the Imo State Government.

The contractors, who protested in front of Universal Basic Education Commission (UBEC) in Abuja, said that they were awarded contracts by the immediate past governor of Imo STATE, Rt Hon. Emeka Ihedioha to execute a number of projects such as renovation of schools, construction of new schools (primary schools and junior secondary schools) before the administration was sacked by the Supreme Court. But Senator Hope Uzodinma, who succeeded him, pleaded with the contractors to continue their projects, a development that persuaded them to borrow money from their banks to complete the projects.

Some of the placards read: “Banks and financial institutions have taken over our property”, “Save our property from creditors”, “Contractors are dying of starvation”, Interests on loans are piling,” etc.

Addressing newsmen in Abuja, the Chairman of the contractors, Honourable Williams Ejiakor, said that the contractors protested in front of UBEC, because the commission is a major stakeholder and having supervised and released its own counterpart funds, the commission should prevail on the Imo State Government to pay them.

HAVE YOU READ?:  4 policemen killed in ambush by kidnappers

‘We renovated schools, built new schools—primary schools and junior secondary schools. We have 261 renovations and new buildings, as well as 23 boreholes and desks. The contract was awarded by the immediate past governor of Imo State, Emeka Ihedioha. We did the jobs on January 14, 2020. When the new governor, Senator Hope Uzodinma came on board, he made a nationwide broadcast on January 16, 2020, and urged us to go back to site and finish our jobs. We obliged him, only to be told in March when some of us had finished our jobs that he was not going to pay.

Advertisements
HAVE YOU READ?:  NMA begins indefinite strike in Imo

‘The annoying part of it is that the fund for this job is domiciled in Owerri branch of Zenith Bank. Our members are suffering. We can no longer pay our bills. We lost one of our members three week ago, because she could not afford to pay her medical bills.

‘So, we have come to Abuja to seek help from UBEC as a senior partner in this matter to prevail on Imo State Government to pay us our money, because a worker deserves his wages. Those jobs followed all known due processes,’ he said.

HAVE YOU READ?:  5 female militants bag up to 30 years jail terms

According to Ejiakor, UBEC has advised the governor to pay them, but the governor is insisting that he would not pay for contracts awarded by Emeka Ihedioha.

‘The management of UBEC has advised the state government to pay us. Why he has refused to pay is what I don’t know. Most of us borrowed money from banks, and the interest is piling every day. We lost a woman three weeks ago. We are appealing to Senator Hope Uzodinma to temper justice with mercy and pay us our money. We did not commit any crime by working for the state. Government is a continuum,’ the chairman noted.

HAVE YOU READ?:  5 dead as plane crashes in car park

Over 2,600 are awaiting trial in correctional centres – Imo State

There is no government in Imo but...