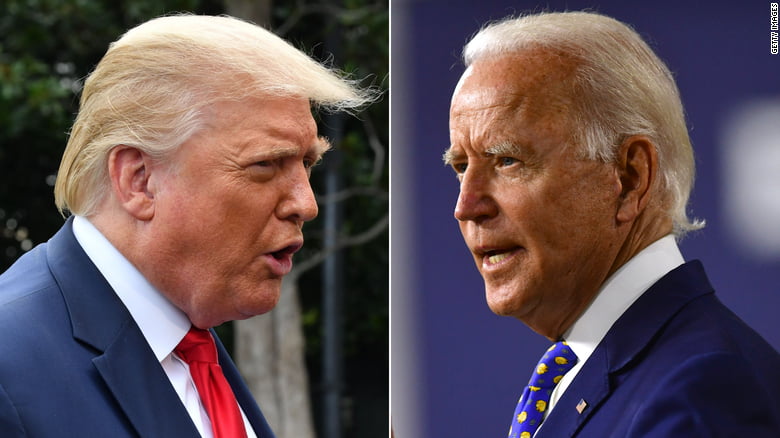 President Donald Trump and Democratic rival Joe Biden have been accusing one another over violence that has erupted at protests in Portland, Oregon.

A man linked to a right-wing group was killed on Saturday, as elsewhere in the city a pro-Trump rally clashed with Black Lives Matter protesters.

Mr Trump called participants of the rally “great patriots” and blamed the city’s Democratic mayor for the unrest.

But Mr Biden accused the president of encouraging the violence.

The Democratic candidate is set to speak in the city of Pittsburgh on Monday, and says he will “lay out a core question voters face in this election: are you safe in Donald Trump’s America?”

Portland has become a flashpoint for demonstrations against police brutality and racism since the police killing of African-American George Floyd in Minneapolis on 25 May triggered a wave of national and international outrage.

Media reports say a man who calls himself an anti-fascist is being investigated over Saturday’s deadly shooting, while the founder of the right-wing group Patriot Prayer identified the victim as a supporter.

Mr Trump on Sunday re-tweeted what appeared to be the dead man’s name along with the message “Rest in Peace”.

Police have not publicly named the suspect or the victim, or specified whether the shooting was directly linked to the clashes.

The president is set to visit the city of Kenosha, Wisconsin, on Tuesday amid anger there over the police shooting of black man Jacob Blake.

What have Trump and Biden said?

“Portland will never recover with a fool for a mayor,” he wrote on Twitter on Sunday as he suggested sending federal forces to the city.

He also accused Mr Biden of being “unwilling to lead”.

..The people of Portland, like all other cities & parts of our great Country, want Law & Order. The Radical Left Democrat Mayors, like the dummy running Portland, or the guy right now in his basement unwilling to lead or even speak out against crime, will never be able to do it!— Donald J. Trump (@realDonaldTrump) August 30, 2020

HAVE YOU READ?:  Trump vs Biden: US Electoral College to confirm winner of election today

Mr Trump continued on Monday, describing Portland as “a mess” and repeating calls for “LAW & ORDER.”

“If this joke of a mayor doesn’t clean it up, we will go in and do it for them,” he wrote.

In another tweet he said “Radical Left Mayors & Governors of Cities where this crazy violence is taking place have lost control of their ‘Movement’.”

“It wasn’t supposed to be like this, but the Anarchists & Agitators got carried away and don’t listen anymore – even forced Slow Joe out of basement,” he added in reference to his Democratic rival.

Mr Biden said the president “may believe tweeting about law and order makes him strong – but his failure to call on his supporters to stop seeking conflict shows just how weak he is”.

He is set to continue the argument in his speech in Pittsburgh on Monday, where he will call the president a “weak” and morally deficient leader who has “fomented” violence in US cities, AFP news agency reported, citing excerpts of the planned speech.

Mayor Wheeler has also hit back at Mr Trump’s criticism, saying the US president had “created the hate and the division”.

“I’d appreciate it if the president would support us or stay the hell out of the way,” he added.

Law and order is a major theme of President Trump’s bid for re-election, painting the Democrats and their candidate as soft on crime. The Democrats accuse Mr Trump of trying to stoke tensions for political gain.

What happened on Saturday?

Unrest broke out in Portland on Saturday night as a caravan of hundreds of Trump supporters clashed with Black Lives Matter protesters.

Portland police said they “heard sounds of gunfire” and “located a victim with a gunshot wound to the chest.”

Right-wing group Patriot Prayer identified the victim as Aaron “Jay” Danielson, adding that he was “a good friend and a supporter”. The group has held pro-Trump rallies in Portland and other US cities since 2016, according to the Associated Press news agency.

HAVE YOU READ?:  Portland protests: Trump and Biden clash over street violence

Mr Trump also shared a tweet naming the victim as Jay Bishop – another name said to have been used by the same man – along with the message “Rest in peace Jay!”

Oregon Live reported that “camouflage gear” with “thin blue line patches” was seen next to the body – a common sign of support for the police.

Local media reports said a self-described anti-fascist is under investigation for the shooting.

Ten people were arrested over the clashes on Saturday.