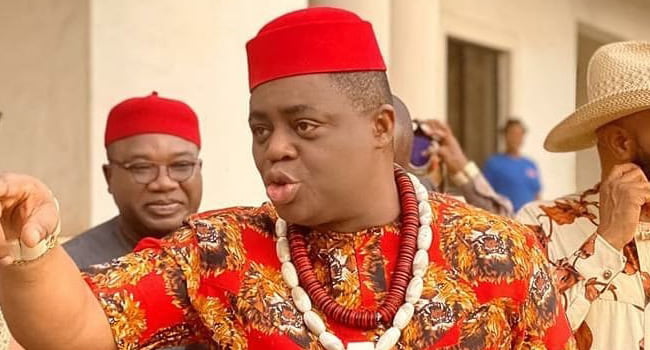 A former Minister of Aviation, Chief Femi Fani-Kayode, has come under heavy criticism for calling a journalist, Eyo Charles, “stupid” during a press conference in Calabar, the Cross River State capital.

In a video, which has since gone viral on the social media, Fani-Kayode was seen giving the Daily Trust reporter a dressing down for asking him a “stupid question.”

The journalist was said to have asked Fani-Kayode who bankrolled his recent tour of some southern states.

The former minister, who was infuriated by the question, said the journalist was stupid.

HAVE YOU READ?:  How Oshiomhole made 14 Assembly members-elect jobless ― Obaseki alleges

He said, “I am saying this on live TV. What type of stupid question is that? Bankrolling who? Do you know who you are talking to? I will not take any questions from this man. What type of insulting question is that? Which bankroll? To do what? Who can give me money for anything? Who do you think you are talking to? Go and report yourself to your publisher? Please don’t insult me here. I don’t want to take any questions from this man.

“I could see from your face before you got here; how stupid you are. Don’t ever talk to me like that. Who do you think you’re talking to? Bankroll who? You think I am one of those ones you… from who, when, how? You have a small mind, very small mind. Don’t judge me by your own standards.”

The viral video has been trending on social media for several hours with many condemning Fani-Kayode’s outburst.

However, some people defended Fani-Kayode’s response, insisting that the question was insulting.

But the Nigeria Union of Journalists condemned the former minister.

The NUJ President, Chris Isiguzo, said in a statement on Tuesday, that the former minister assaulted the journalist and threatened him for asking a question.

Isiguzo said the question posed to Fani-Kayode was appropriate because the former minister had been touring several states without revealing his true intention.

HAVE YOU READ?:  What we’re doing to improve Nigeria’s electricity supply – Minister

He said, “By denigrating the journalist, Fani-Kayode has exposed himself the more as an intolerant person who will not want his activities closely scrutinised by the media.

“It is instructive to remind the likes of Fani-Kayode that it is the constitutional right of journalists to monitor and keep a check on people and institutions in power. By delving into politics and holding political office, Fani-Kayode is very conversant with the watchdog role of the media.”

The NUJ President said it was ironic that Fani-Kayode who was highly critical of the government could take issue with simple questions.

“We are more shocked that the same Fani-Kayode who had in recent times, used his social media handles to call leaders to account is at the same time attacking a journalist for a simple demand for him to unmask those behind his nationwide tour. He had already visited six states. This is indeed, terribly disappointing,” he said.

HAVE YOU READ?:  Just in: Students protest against schools closure today

However, Fani-Kayode said he had no apology for his conduct.

The former minister said on the contrary, the journalist involved had apologised to him.

The former minister said, “During my tour of the South and after a long and successful press conference in Calabar, Cross River state, a journalist put up his hand for the last question and said, ‘well we do not know who is bankrolling you’. This is not a question but an assertion and an insult.

“And if this insulting assertion were made before (Donald) Trump or OBJ (Olusegun Obasanjo) I know how they would have reacted…I have no apology to offer for it. The young man apologised to me during the press conference and sent his apologies to me after the conference. I have accepted his apologies in good faith and moved on.

90 million subscribers to benefit from revised...