He will be docked on Monday, according to EFCC spokesman Tony Orilade.

News Agency of Nigeria (NAN) reports that the musician effectively risks seven years in jail if found guilty in accordance with Section 33 (2) of the Cyber Crimes (Prohibition, Prevention, etc) Act, 2015.

The charge with suit number FHC/L/178C/19 was filed before a Lagos State High Court on Wednesday.

Advertisements
HAVE YOU READ?:  That Moment of Glory: McotGreenz wins Mr. Tourism Nigeria 2019

Some of the credit cards, according to the EFCC, bore the names- Nicole Louise Malyon, and Timea Fedorne Tatar.

The alleged crimes were in contravention of the Money Laundering (Prohibition) Act and the Cyber Crimes Act. 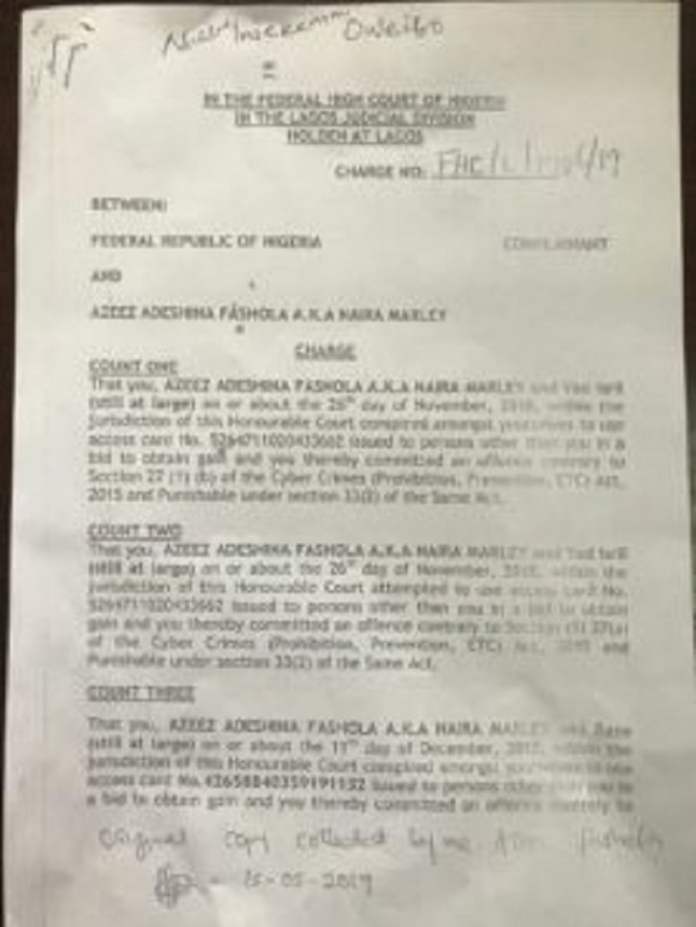 The charge read in part, “That you, Azeez Adeshina Fashola, aka Naira Marley, and Raze (still at large), on or about the 11th day of December 2018, within the jurisdiction of this honourable court, conspired amongst yourselves to use Access card 42658840359191132 issued to persons other than you in a bid to obtain gain and you thereby committed an offence contrary to Section 27(1)(b) of the Cyber Crimes (Prohibition, Prevention etc) Act 2015 and punishable under Section 33(2) of the Same Act.

HAVE YOU READ?:  Gospel Singer St. Chika to perform at Coast2Coast Live

“That you, Azeez Adeshina Fashola, aka Naira Marley, and Raze (still at large), on or about the 10th day of May 2019, within the jurisdiction of this honourable court, with intent to defraud possessed counterfeit card 4921819410257431 issued to Timea FedorneTatar and you thereby committed an offence contrary to and punishable under Section 33(9) of Cyber Crimes (Prohibition, Prevention etc) Act 2015.”

The singer, who was detained on May 10, is controversial for repeatedly praising internet fraudsters, popularly called Yahoo boys, in his songs and on social media.

NAN reports that Naira Marley was arrested alongside his friend and fellow musician, Zlatan Ibile who was released on Wednesday.

Tell Your Friends About This Page
Advertisements

I will impose more tariffs on chinese goods-Trump

Foreign News OtownGist - June 19, 2018
0
President Donald Trump has threatened that the U.S. would impose tariffs on an additional $200 billion of Chinese goods in a revenge trade row. Trump...

Downloads OtownGist - July 14, 2014
0
You love good afro pop song? am sure you gonna love this dude opynco drops his latest single,the komole master is back with...

Downloads OtownGist - October 6, 2017
0
Africa's fast rising music art "Obidiz" makes his way back to the music scene after a short break, with this highly spirited gyration...

Entertainment OtownGist - May 3, 2018
0
In what would seem like a dancing contest, Gov Rochas Okorocha of Imo State took Miracle, Nina, Bambam, Tedy A and Tekno on stage...

We can help you create and promote standard contents across the internet/other media in Nigeria and beyond. Call/Whatsapp +2348038704454 or follow on Twitter/IG/FB @OtownGist and @HardyNwa
© OtownGist - Designed by HardyNwa +2348038704454
MORE STORIES