The death toll from bomb blasts that ripped through churches and luxury hotels in Sri Lanka rose dramatically Monday to 290 — including dozens of foreigners — some of whom have been identified by British newspapers.

Among them were the Nicholsons who were having breakfast at the Shangri La hotel when the bombers struck. Anita Nicholson, 42, a lawyer and her son Alex, 11, died instantly. Her husband, Ben was seriously injured, while the daughter, Annabel is still missing, the Daily Mail reported.

According to the newspaper, the family were living in Singapore, where Mrs Nicholson had worked for BP before joining mining company Anglo American. Mr Nicholson was a partner in the Singapore office of Kennedys Legal Solutions and advises clients on insurance law.

HAVE YOU READ?:  Country where blogging costs $900

Other victims mentioned were Shantha Mayadunne and her daughter Nisanga. They had posted a photograph of their breakfast before the attack.

More than 500 people were injured in the Easter Sunday assault that saw suicide bombers hit three high-end hotels popular with foreign tourists and three churches, unleashing carnage in Colombo and beyond.

There was no immediate claim of responsibility, but police said Monday 24 people had been arrested, over the country’s worst attacks for more than a decade.
The government is wary of stirring ethnic tensions, and the country remained on edge as a home-made bomb was defused at Colombo airport late Sunday and massive security deployed.

A nationwide curfew imposed shortly after the blasts was lifted early Monday, but the government has ordered a two-day holiday and schools and the Colombo stock exchange were closed. Still, a steady stream of people and vehicles were seen on the streets of the capital and Negombo.

The attacks were the worst ever carried out against Sri Lanka’s small Christian minority, who make up just seven percent of the 21 million population.

At least 37 foreigners were among the dead, the foreign ministry said.

HAVE YOU READ?:  Man cries to police over threat to life by cousin

The government said three Indians, three Britons, two from Turkey and one Portuguese had died, as well as two persons holding both British and US passports.

“Additionally, while nine foreign nationals are reported missing, there are 25 unidentified bodies believed to be of foreigners,” the foreign ministry said.

Japan’s foreign ministry said one of its nationals was among the dead.

The churches targeted included St Sebastian’s in Negombo, north of the capital, which was surrounded by security forces on Monday.

HAVE YOU READ?:  Gov. Okorocha emphasizes on the military core values

The churches targeted included St Sebastian’s in Negombo, north of the capital
Dozens of people were killed at the church, including friends of 16-year-old Primasha Fernando, who was at her home nearby when the suicide bomber struck. 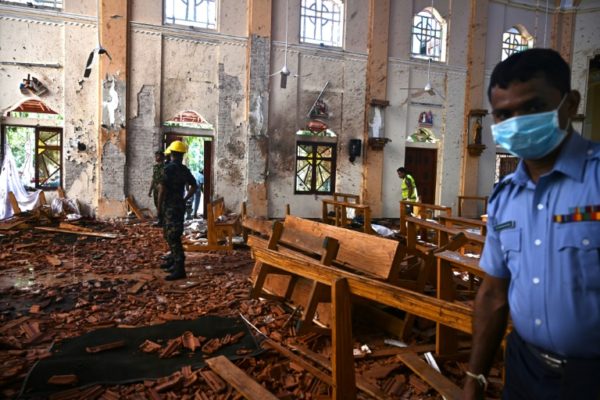 “When I got to the church there were people crying and screaming,” she told AFP.

“I saw bodies everywhere,” she added in tears. “I saw parents carrying their dead babies. I saw dead people who had hair but didn’t have faces anymore.”

HAVE YOU READ?:  Imo: Third Force Movement reveals next action against Supreme Court

“Hands and legs were separate from bodies. There was blood everywhere too. The smell was so strong it made me feel sick.”

The church’s roof was largely blown out and pews splintered. The floor was strewn with roof tiles and shards of glass.

Outside, 24-year-old Denver Malewama and his mother Sunita handed out tea to security personnel.

“We want to say thank you because they protect us,” he said.

HAVE YOU READ?:  ROWDY SESSION IN IMO HOUSE OF ASSEMBLY AS SPEAKER SOLELY REMOVED MAJORITY LEADER

Some Sri Lankans asked how the attacks could have happened after it emerged that the government had been warned about possible blasts.

The NTJ is a radical Muslim group in Sri Lanka that was linked last year to the vandalisation of Buddhist statues.

Prime Minister Ranil Wickremesinghe said an investigation would look into “why adequate precautions were not taken”.

The government said investigators would look into whether the attackers had “overseas links”.

Harassment of doctors, journalists by Police

My worst moment as father was carrying my...

Who Blinks First Between Okorocha and Ihedioha